Jeannine Bardo and Isabelle Garbani have been selected for the
Red Hook Climate Change Public Commission with the proposal called Ark for the Arts.

In Biblical mythology, the ark is used to safeguard the most precious possessions against the incoming floods and potential enemies. The ark can also be seen as a metaphor, as a place of refuge and safety. Currently, potential flooding because of climate change has become a real and urgent issue that must be addressed, as it threatens our coastlines and low-lying neighborhoods such as Red Hook. The past year has seen additional assaults on what we hold dear in Brooklyn: our culture and diversity are being attacked with the rise of nationalism, racism, and a war on the arts.

We are working as a team of two environmental, socially-engaged artists and educators: Jeannine Bardo and Isabelle Garbani. Our team members will work as facilitators to organize and promote community events around the Ark, help design and engineer the Ark, conduct free art workshops in Red Hook, and help schools integrate the project into their curriculum.

Our proposal, called the Ark for the Arts, is an amphibious, human-powered mobile structure, a movable Ark for the neighborhood of Red Hook. The Ark is to be freely used by the community for any arts, cultural and community events such as dance recitals, concerts, theater, art classes, nutrition, wellness workshops, emergency preparedness classes, voter registration drives etc. The community chooses and designs their own programming according to their needs and the artists act as facilitators. Community members are the artists, Isabelle and Jeannine are the brushes, and the neighborhood is the canvas.

The Ark becomes a symbol of resilience and transformation against environmental and political threats: it promotes, preserves and empowers the neighborhood. The Ark can be moved to specific locations and become a stage, a rallying point or a classroom. The library will act as “The Guardian of the Ark”, and serve as a place where the community can reserve the Ark for their events, get the key to the Ark, and ask for any additional support from the artists.

The Ark is a flexible, scale-able structure: we start with a visually compelling project very early in the fall, and keep building up the Ark and its components through the Winter and Spring of 2018.

More about the project is posted on the New York City mayor's office's website: Ark for the Arts. 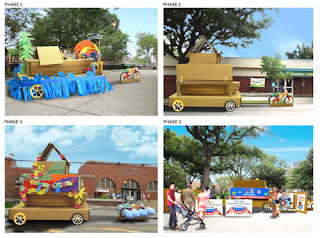 Ark for the Arts